DataBasin, the clean-room impelmentation of a data extraction tool for SalesForce.com available for GNUstep and Mac just made a big leap forward!

If you have ever done a SELECT in salesforce.com, you might have noticed that the results are not ordered and that semi-joined fields ("." notation) are handled strange because a whole object is returned.

DataBasin extracts the  columns of the CSV file by checking the first row of the dataset and recursing on the field names of salesforce's response. The effects in DataBasin are the following:

I added a new option available in write out fields in the order of the query.

This feature implies a more complex under the hood. For each record gotten in the response, the field names are reconstructed as before (e.g. by recursing inside sub-objects) and put in a Dictionary.

The original SOQL query is parsed and the field names extracted, then these names are used as keys for each record dictionary and written out.

This approach looks fine and comes with a relatively small performance penalty, however it is delicate because during parsing of the query, many naming subtleties of Salesforce.com needs to be inferred, that is, DataBasin tries to infer how the name in the Response will be:
I hope I have not missed any! in any case, enjoy! 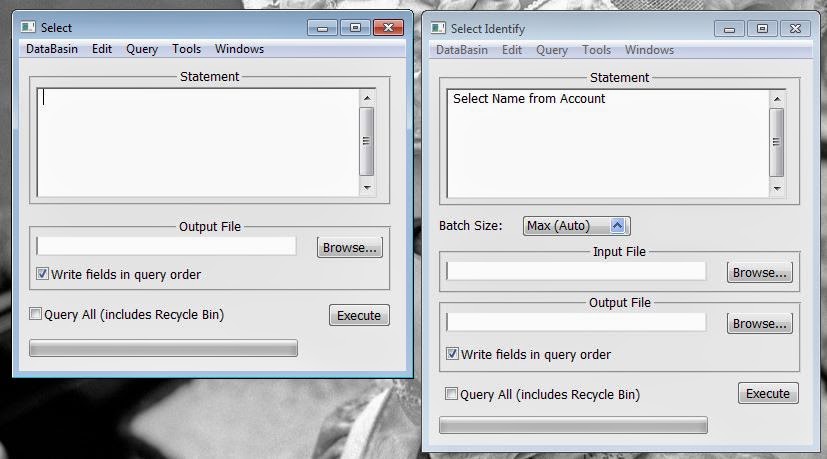 This feature is available now both in Select and Select-Identify, since it is a problem of the CSV Write backend and enhances DataBasin operation usability greatly, bringing it on par with DataLoader.
Since DataLoader performces similar transformation and sometimes produces wrong results, I left this feature as optional with the flag "Write fields in query order".
Posted by Riccardo at 2:59 PM 2 comments: Links to this post