LaternaMagica is the image viewing and exporting tool of the GNUstep Application Project.
Quickly create a list of images and export it by converting the file type and resizing the images to a uniform size, to prepare your next slide show, a folder of thumbnails or the folder to give your local printer and print out pictures.

The new 0.5 version comes with a lot of fixes and improvements. 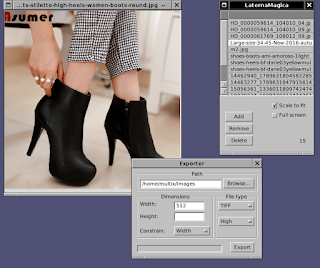 
New releases which combine many improvements collected in the past three years!

GNUMail and Pantomime found a home in the past years in the "GNUstep non-FSF" project on GNA. However, GNA shut down and the project was moved to https://savannah.nongnu.org/projects/gnustep-nonfsf. This move was time consuming, left the repository unavailable for weeks, but we were able to recover the repository with full history. The code is on savannah.nongnu.org on SVN.

During the move, Copyrights, Headers and Licenses were cleaned up. The X-Face code had no clear license and was removed. It is quite an obsolete feature anyway, I haven't seen it used since long time.

The MacOS version works quite well and we provide now both a PPC and an Intel binary. The PowerPC version works well on vintage Macs so you can use GNUMail on your trusty iBook or iMac! 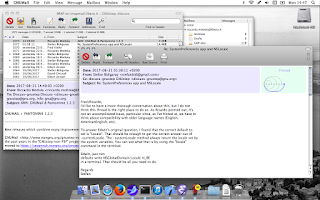 Posted by Riccardo at 2:48 PM No comments:

An update on my notes to compile NetBSD kernels and userland.

-U : for unprivilged building
-u : to update
-m : to specify architecture

To cross compile, this is would enough:
./build.sh -U -m i386 -u tools
However, since I do want to build on the same computer and the build script would be confused, we add -T /usr/tools-${HOST_ARCH}-${TARGET_ARCH} and also separate the object dir with -O!


Then we build the kernel

The modules:
./build.sh -U -u modules installmodules=/

After (too) many years, finally a new release of Graphos.

This release has two new important features: cusps and images.

Splines support now cusps, that is left and right asymmetrical tangents to a control point.

A new image item object exists. This allows you to paste a preferably small image and move it around like it were a box, resizing it at will.
This is quite useful to be able to manually overlay lines and trace images.
Since the image is directly encoded in the file and not saved as a separate image it is not very efficient and using large images is not advisable. In the future a new bundle file format needs to be implemented. 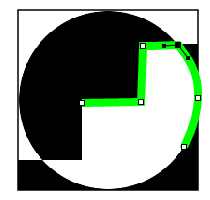 The screenshot shows an example of tracing the GNUstep logo imported as a bitmap, using the cusp point in the upper right.

Many bug fixes and improvements in these past years, some major:
To support cusps, the file format changed again, reading of old formats is still supported.
Posted by Riccardo at 6:10 PM 2 comments: