I worked hard and had to do quite some tests... but I finally got new RPMs for GNUstep and its applications, they represent quite an improvment over the last version and I have also added applications compared to the last time.

The packages and source pakages are here.

As always the packages are made with MkLinux in mind, but I made them more general removing some weird hacks, thus I think they will work on more distributions, especially if starting from source.

I put all applications and tools in their own "GNUstep" category now.

Thanks to the patience of its developer, Andy Ruder, TalkSoup was made compilable on gcc 2.95 and thus is available for MkLinux too!!

The great apps that are missing are GNUMail, which compiles and runs but has then problems finding the Inbox folder, and ProjectCenter which compiles bug segfaults on Mklinux. Both applications work on my Gentoo system instead. If someone has hints... let me know

Try the source RPMs out at your place!

Posted by Riccardo at 11:23 PM No comments: Links to this post 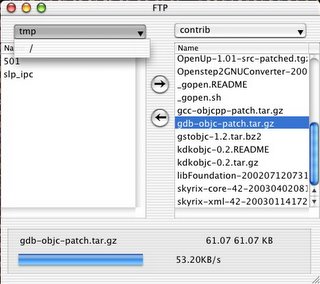 This weekend Battery Monitor 0.2 and FTP 0.1 were released for the GNUstep Application Project. I hope with this small contribution to help out a bit the GNUstep problem which is, in my opinion, also a general lack of tools and applications.

Battery Monitor checks ACPI and to do this peeks inside the /proc file system. Once again working with it makes me thing on how weak and bad the idea of files versus syscalls is. I am forced to parse files with a useless overhead. Furthermore linux did also a very poor standardization effort and the /proc/acpi changes from laptop to laptop as well as from kernel to kernel version!

Also I have a worried thought for the future, I spread myself thin over a couple of projects now, all of which I think are useful. As I fear to get more busy in the future and as I hit some problems in the current design of the applications, I seriously fear that without external help and collaboration the projects are going to stagnate and be left unfinished, which would be indeed a pity. But it once again reflects another aspect of the GNUstep community.

This also reminds me to tickle Nicola again about the possibility to use kaffe with JIGS! Java integration can only do good to us.
Posted by Riccardo at 9:52 AM 1 comment: Links to this post