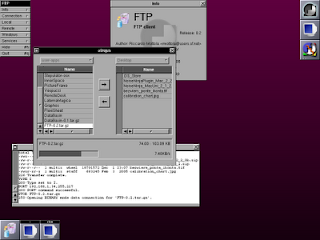 Finally, after months of delays and tweaks, FTP 0.2 is out! FTP is the FTP application in GAP for GNUstep and Macintosh.

Externally, few changes can be noticed: a new icon, the correct fixed pitch font in the log window and little more.

Internally, several changes happened though. Two are the main news.

First, the socket core was rewritten not to use file operations: on non-Unix systems sockets may not be files. This change allows, after some additional effort, to run FTP on windows. Thus FTP now runs natively on the Macintosh, runs on GNUstep on unix systems like BSD, Solaris or Linux and now on Windows too.

Second, the data connections are handled in a separate thread, which talks back to the main thread using DO (Distributed Objects). This allows the UI to remain responsive during list and download operations: this wasn't a real issue on the Macintosh, but on GNUstep windows wouldn't even redraw their contents during download, making the progress bar pretty useless. I still do not allow concurrent downloads, since the FTP protocol is not designed for that and it needs some workarounds.

Enjoy! Be sure to have the latest version of GNUstep base, since the DO system contains some fixes which are needed for FTP to work correctly.