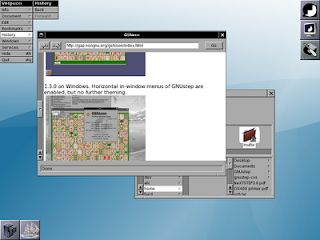 It has been quite some time since the last post here. My coding efforts were and are scattered among the various GAP applications. Vespucci has lately received most of the attention. The window and document controllers were rewritten to follow more the NSDocument and NSDocumentController philosophy. The major benefit is that some smaller features that worked only on Mac now work well also on GNUstep.
The recent Document list now works, which is handy for local files. Opening URLs fron NSWorkspace works more reliably. 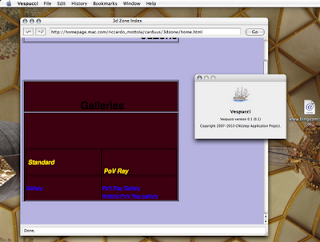 During the restructuring, I added the classic back and forward buttons. Thanks to suggestions of Wolfgang Lux now both the buttons and the menu entries are validating and disable/enable themselves.

Incidentally, the screenshot of Vespucci running on GNUstep is also on HURD! The mac screenshot shows the portability and shows that on Cocoa SWK has rough table support through NSTextTable.
Posted by Riccardo at 10:29 AM